Instagram CEO Adam Moserri recently released a video outlining the company’s second-half priorities for 2021. While he outlined four areas of focus for the Facebook company — creators, video, shopping, and messaging — Moserri spent most of his time discussing the potential product changes around video.

“We’re no longer a photo-sharing app,” he said. “The number one reason people say that they use Instagram, in research, is to be entertained.” With that in mind, Instagram is experimenting with more full-screen recommended videos in the main feed. That’s a major shift for Instagram and makes it more like TikTok. 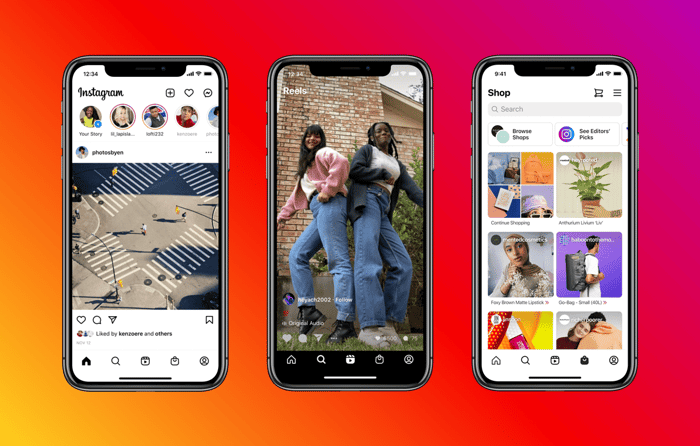 Over the last couple of years, TikTok has exploded in popularity. Its U.S. user base grew more than 87% in 2020, and it’s set to grow another 18% this year, according to estimates from eMarketer. What’s more, its users are highly engaged, spending more time, on average, on the social video app than the users of any other social media app. Younger users, in particular, are spending huge amounts of time on the app, even more than YouTube.

It’s no wonder Instagram has been working to copy the secret sauce that makes TikTok so addictive. It released Reels last summer, and it’s been quick to expand the feature to new markets and add functionality over the last year. In June, Instagram started showing ads between Reels, indicating it’s seeing strong engagement that’s worth monetizing.

But what makes TikTok so engaging is that you see fresh content every time you open the app. Instead of seeing videos from the users you follow, the default view is TikTok’s recommendations. And the recommendations are really good.

Instagram’s certainly capable of developing an algorithm that surfaces the most interesting videos for each user when they log in. It, along with its parent company, has a ton of data on its users’ likes and dislikes. In fact, it already has a version of algorithmic recommendations in the Explore section of Instagram.

Putting that algorithm to work earlier in the user experience, right when users open the app, and highlighting the best content on Instagram can increase engagement. And with the new monetization tools, Instagram introduced in June, could lead to more revenue as well.

Stemming the flow of users to TikTok

As mentioned, TikTok has seen enormous user growth over the last couple of years. While growth will slow in 2021, it’s still expected to add users at a faster pace than any other major social media app.

What Instagram needs to accomplish is to stem the flow of users from its app to TikTok. It’s not that users are abandoning Instagram, it’s just that they’re splitting their time between Instagram and other apps. If Instagram can capture the engagement it’s bleeding to other apps, it’ll be in a stronger position to monetize its users. Not only will it have more time to show ads, but marketers will find its competitors less appealing since they won’t have the mass engagement and reach of Instagram’s billion-plus users.

Instagram successfully accomplished this when Snapchat threatened its engagement. The launch of Stories had a noticeable effect on the competitor’s growth for a couple of years before Snap could pivot to more of a media and entertainment focus.

One of the biggest reasons for its success with Stories is that the format is prominently featured in the app when users open it. Stories sit right at the top of the main feed. Giving Reels, its TikTok clone, a similar treatment by putting recommended videos in the feed could have a similar effect.

So, not only does Instagram hope to meet the demands of its users for more entertainment in the app, it’s hoping it can prevent them from looking elsewhere, too. If it works out, Reels could become a significant growth driver for engagement and revenue, just as Stories has over the last few years.

This is just the latest move from Facebook and its subsidiaries that helps ensure it keeps its dominant position in social media and digital advertising despite increased competition and regulatory pressure. That makes the stock very appealing, even with shares priced near the stock’s all-time high.

7 Simple Ways to Reposition Your Brand for Growth

How To Build A Strong Brand Step By Step

The Road to Success in Digital Marketing for Local Businesses